Of all the home projects we’ve done flooring was the probably the hardest from a decision making perspective and being patient. It’s a project we talked about for a long time, and decided to put it off until after Sky was past being a toddler, and after our dog Bishop had passed as he was having a lot of accidents towards the end. Obviously we were not in a hurry for either thing to happen…kiddos grow up too fast and man we were dreading letting Bishop go when the time came, so were happy to keep the worn out carpet for as long as needed.

When the time did come to look at new flooring options boy was it hard! It’s not like paint, if you get it wrong it’s a lot of money to do over, and a ton of work. It took us over a year to find the type of flooring we wanted, and then find a color/finish we were both happy with. We tried samples in every color you can think of. We were open to something different/funky, but in the end went with a neutral wood finish look that would make selling (some day) easier.

There are some house decisions that I really wish someone else would just make for us. It’s really hard when we are looking at thousands of dollars for a project. The commitment to the money along with wanting it to be perfect at that price point is just a lot of pressure for me, and I sort of freeze. Several times we thought we were close to having a decision and then one or the other of us would nix it and we’d be back to square one. Very frustrating! I was even willing to just pull up the carpet and have it be ugly unfinished flooring for however long it took to make a decision, but thankfully it didn’t come to that.

We settled on Drop & Done Vinyl Planks that are supper easy to install. You literally drop them in place, we only glued down the perimeter of each room & the heavy traffic section down the middle of the living room, it’s easy to cut with a box knife, and once we got to the point of putting the flooring in it went really fast. I could hardly bring the planks to Mark fast enough he was putting them down so fast. 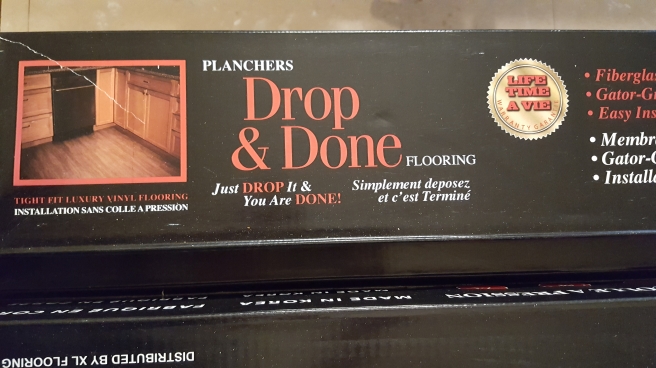 I had to put my patient home owner hat on since this project required moving furniture all over the house, multiple times, to prep the floor, and then to install. The hardest part about this type of flooring is making sure you have a totally smooth surface to lay it on top of. Any dirt or bumps in the sub flooring will show through the planks, so we spent a lot of time putting new, smooth sub flooring down, and sweeping/vacuuming the flooring before laying the planks.

The requirements for us were durability…kid/dog proof (getting another dog is going to happen!), waterproof (putting it in the bathroom/kitchen/and laundry space meant it had to be waterproof…plus we’ve dealt with a flooded kitchen before, no fun!), something we could install on our own, and replace individual planks if there is damage, plus we had to be able to afford it, and like the way it looked in every room in the house (minus the master sweet). That’s a tall order I know, but we managed to pull it off.

We love the final results, so much so that we haven’t even bothered to look for an area rug, which was part of the plan for the living room. It’s so nice to see seamless flooring through the whole house, it just looks much cleaner and cohesive, and bigger. All the time spent picking it out and installing were totally worth it! The only thing left to do now is the trim, but we took a break from that during the summer months to work on outdoor projects instead. Now that it’s raining and cooler we’ll get back to the trim and finish the project.

One thought on “New Flooring”