So, one of Sky’s favorite shows on TV is Naked and Afraid. She likes it so much she’ll chooses to watch that over cartoons or movies!

Not only does she love watching the show she’s also decided she’s going to be on the show. Which is fine with us, but she needs some practice and has just a few survival skills to learn first. Not that she’ll admit that though! While the three of us were watching Mark offered to take her on some weekend camping trips to work on her skills, she declared she didn’t need his help and already knows what to do (I feel his pain every day…I’m always wrong and she never needs my help, even when she really does!).

I asked her if she knew how to start a fire to which she says yes. My reply “prove it”. Go outside and prove it. I totally didn’t think she’d do it (seriously I should know her better than that by now!), but off she marches to start a fire.

The problem…Mark – “You do realize you just sent a 6 year old outside to start a fire, and she knows there is a lighter by the BBQ”.

Err…file that under “think before issuing a challenge to a determined 6 year old”! 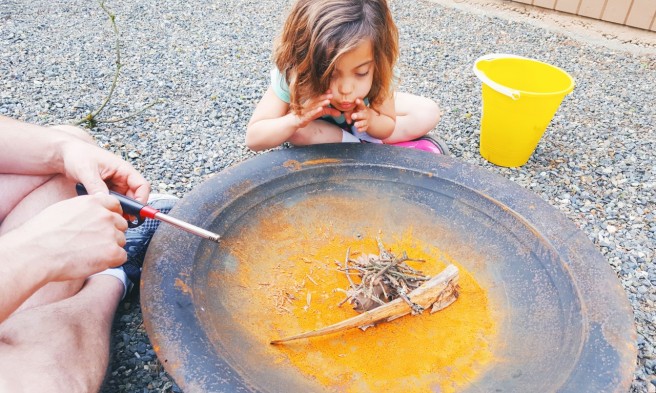 Thankfully Mark stepped in to fix the fire safety pickle I potentially put us in! He walked her through safely starting a fire and explained each step and why it was important. She got a nice little fire going and was pretty proud of herself!

Step one in survival training…check! Now, had I been thinking we could have roasted s’mores over her fire!

One thought on “What Happened Was…”