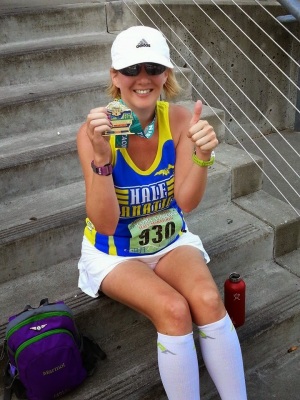 Finally able to smile and enjoy the accomplishment!
The reality is though this is what the finish line really looked like for me… 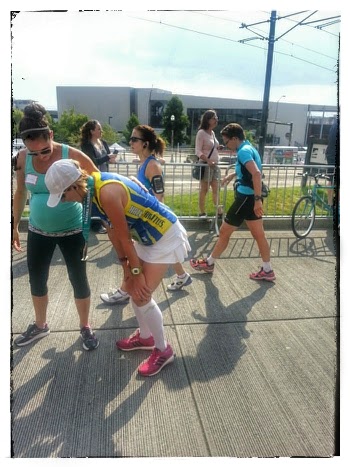 The woman in the light blue shirt just behind me…remember her, she’s important! 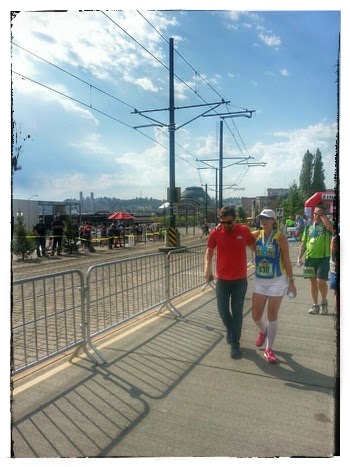 Collin keeping me on my feet…I was not feeling well at all. 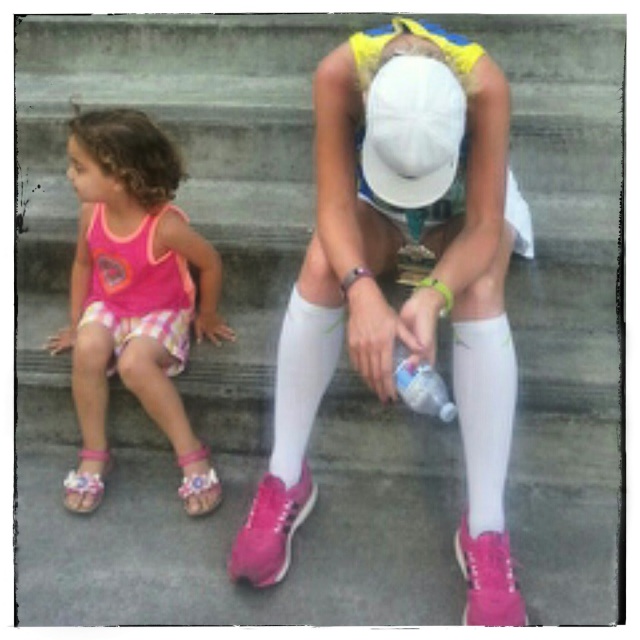 Emotional fall-out!  Could not stop crying.
I was a little lost as to what my specific goal should be, and what pace I’d actually be able to do since I missed so much training with the knee issue.  After my 12 miler though it looked like something between 2:00 and 2:10 would be a good goal to shoot for.  So, I lined up right behind the 2:10 pacer and we took off.
I felt really strong at the start and passed up the pacer pretty quickly, my plan at that point was to keep 2:10 behind me clear to the finish.  By mile 3 I was with the 2:00 pace group and it felt good…I didn’t feel like I was running faster than I should have been (I did freak out a little in my head though…who did I think I was running with the 2:00 group?!).  Even though I ran with my GPS I didn’t look at it once.  I have a bad habit of looking at the watch and getting stressed if I’m too slow, and slowing myself down if I think I’m going faster than I’m capable of.  I’m pretty even paced naturally (according to running buddies) so I decided to just go with what felt good.  (After looking at my splits for each mile I was running a pace that is good for me from the start.  I thought maybe I started too fast, but I really didn’t).
I felt pretty great the first 6 to 7 miles.  I was getting too hot though and kept having to take my hat off and let the breeze cool me off, then I’d put it back on.  I thought about ditching it, but it’s Mark’s hat, plus my hair was a mess and even though I was getting way too hot I didn’t want my finish line photos to be with messy, sweaty, hat hair.  Stupid I know.
Mile 9 I saw Dad for the last time before the finish and by then I was fighting to keep calm.  I was starting to feel sick from the heat, the only thing that wasn’t bothering my tummy was water, and my legs felt like bricks. It was a struggle at that point to keep going.  I almost started crying when I saw him, but managed to hold it together and after a short walk break with him/trying to get some electrolytes I took off again because the 2:10 pacer was right behind me.  Dad had my hand held water bottle, so I took it with me and figured maybe drinking water more often than the aid stations would help, but by that point in the race I was already in trouble, and the water bottle was so heavy my arms just couldn’t do it.  I ended up ditching it at the 10 mile marker.
By this point it was a cat and mouse game with the 2:10 pacer.  I had to walk a few times to keep from vomiting and every time the pacer was catching me just as my tummy calmed down enough for me to run again.  I’ll tell you that last 3.1 was the longest 5k of my life, and the last mile I was pulling out every trick I could mentally to keep going.  But, with about .6 to go one of my legs locked and I almost fell.  I wanted to stop so bad but managed to stay on me feet and keep going, constantly looking over my shoulder for the pacer, she was so close!
That’s when the lady in the blue shirt saved me!  As she was passing me she looked back at me, reached out her hand and said “Come with me, we will finish together, I’ll get you to the finish”.  She must have seen the panic on my face, I was so close to the finish and so close to loosing it all.  So I ran with her.  She talked to me the whole time and was so encouraging!  As soon as I could see the opening to the shoot I told her to go ahead and go (she still had a finishing sprint in her legs…I did not) and she asked if I was sure.  She wouldn’t leave until I promised her I was going to make it and not stop.
I’m glad Dad got that picture of me double over with her in it, because I was out of it, my vision was flashing black and I was dizzy…I had no idea she was right there next to me after the finish line…I would have given her the biggest hug if I had known. 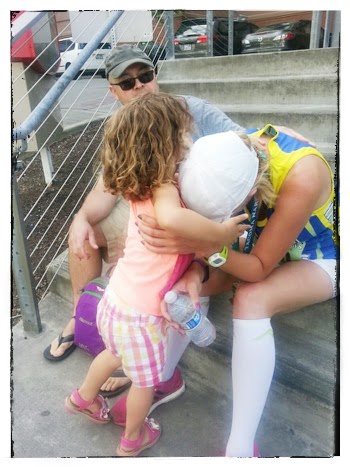 I was emotionally, mentally, and physically exhausted.  Everything was so overwhelming.  Every hug and every word of congratulations just made me cry.  Pulling off a PR when there were points that I didn’t even know if I’d be able to finish was just a lot for me to take in.
I won’t be chasing another Half PR any time soon, maybe never, but for now I’m really proud of myself! While I had awesome support along the way I was out there alone for 13.1 miles, and I got myself through it…I didn’t let myself down and I’m really proud of myself for getting it done!
A few things I learned along the way:
-Races/courses run previously with a friend are a lot harder, and a lot less fun when alone!
-While I’m super proud of accomplishing my goal…that is not the kind of running I enjoy.  I would rather run an easier pace and/or run with a friend(s) and enjoy it more, actually be able to smile at the finish.
-The issues I have running in the heat are not just a fluke.  It’s happened enough now that I will most likely be skipping August races, or at least the half distance.  The shorter distances may be doable still.
Next up is the You Go Girl Half the middle of Sep which I’m actually dropping down to the 10K.  I need a break from the half, it’s not a course I like very much, and I need a 10K to PR, and this one is a PR course, so it all works out for the best.
PR goal #1 for the year done.  Now, to go get #2…I actually think the 10K is the hardest distance for me, so will see what happens.  🙂
For now I’m going to enjoy this one for a bit, rest the legs this week and focus on some fun running before thinking to much about You Go Girl.
All the photos are from Dad and/or Mark!