Good news!!!!  Apparently her arm is all better!  Mark’s ability to pop her elbow back in seemed to have done the trick!  I planned on getting her into the Ortho regardless, but after 2 hours of trying to get through on the phone I was told by the hospital operator that the main line to the office was down and they would not transfer me to a back line (nurses line), so I gave up.

I opted for play time at Frog n Kiwi instead and figured if she was hurting after I would try and get through again.  At this point I’m in favor of skipping the Dr. visit/cast and seeing how her arm does.  If it pops out again I’ll admit I was wrong and we will go in, but I really just don’t want to go through the whole cast thing again if we don’t absolutely have to. 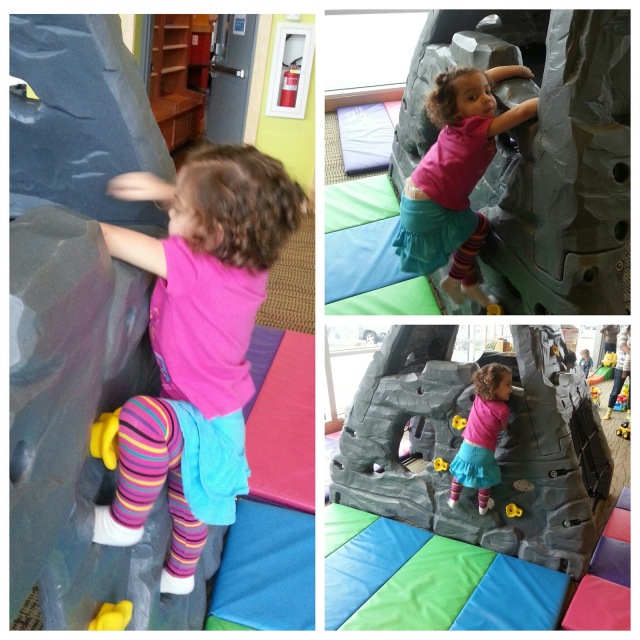 Proud Mommy moment…another parent came up and told me that Sky was playing so nicely with the other kids, and really good at taking turns.  Yes!!!!

Sky’s arm may be pain free today but my legs sure aren’t.  Yesterdays run did me in.  I was so worn out and felt run down the whole rest of the day, and my legs were sore and tired.  They felt like they didn’t want to hold me up at all.  I’m still sore today, but not as bad thanks to foam rolling!  It’s mildly concerning since it wasn’t a super fast pace nor was it a long run.  5 miles is usually no big thing for me, so not sure what the deal is.  I hope I’m not getting sick, but that would totally explain it.  I’m resting today, skipping run group tonight, and will get back at it Wednesday with the stroller group.

I’m probably one of the few runners that skips runs/takes rest days as easily as I do.  I’m motivated, but I guess I’m not overly motivated.  I have a pretty good grasp on don’t want to vs shouldn’t, and I think today is a shouldn’t run day.  Never mind that I don’t really want to run in the dark, in the wind, and in the rain, but if this was strictly a I don’t want to thing I would make myself do it.

How do you get yourself out the door for a run/exercise when you don’t feel like it?
I try to continually have a race on the books so I have something to train for and motivate me.

Follow todaysadventureis on WordPress.com
When your HS Librarian is still impacting your life through books. Sky was so excited about her new books she read all evening! #livingtheskylife #bookworm