This week really feels like we are finally getting back to a normal schedule around here.  Even though Mark is working from home all week (and that is not normal) my schedule is back to normal as is Sky’s.

We were super excited to get back to Monday morning play dates with Reagan yesterday!  Sky had been sick for so long, and with busy Holiday schedules it had been over a month I think since the girls had seen each other.

Reagan was probably happy to see us go so she could have her trampoline all to herself.  Sky loved that thing!!! 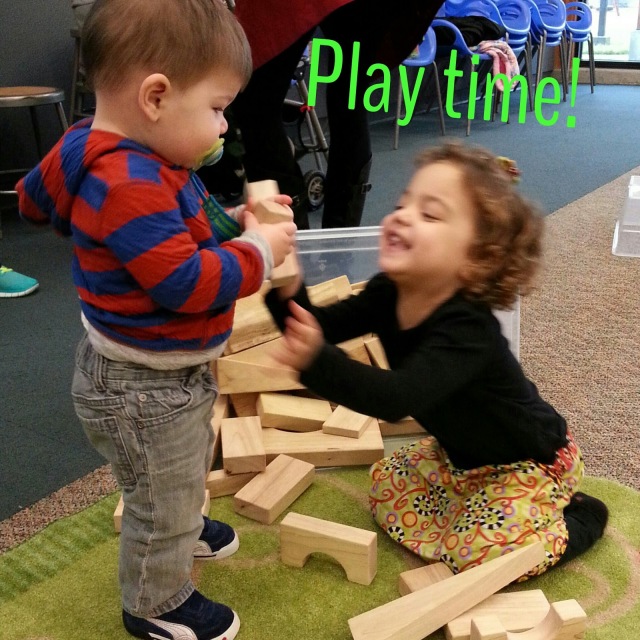 Sky was super excited to see Harrison (Reagan’s little brother) again today.  Despite what it looks like she is not trying to take his block out of his hands.  She was actually really excited to see him and spent all morning talking about sharing with Harrison at Play To Learn.  If Sky doesn’t learn anything else from her Play To Learn classes at least she has learned that sharing is nice and she is really great about taking turns!  For the record though she has learned tons of other stuff as well.

The upside of Mark working from home is that the online classes tend to be over earlier than when he would normally be home from work.  So, it gives us a jump on the evenings activity, which last night was another stroller run.  It was cold, and it felt pretty hard, but I did manage to run the hill that is my nemesis with the stroller, without a walking break!  That is progress folks!

As much as  I LOVE running with the babe and baby, I’m looking forward to a stroller free run tonight with the group.  It’s guaranteed to kick my a$$ but I want to see where I’m at without the stroller.  I don’t even mind that it’s raining…at least we are not in a deep freeze like other parts of the country are!  Mostly I’m just really excited to have my “normal” running schedule back.  The Holiday’s fell on group run days, so it’s been two weeks with no “hard” run.

After our run and dinner last night there were two sleepy heads who were super content to cuddle on the couch and watch the BCS Bowl Game.

Love those two so much!

Anyone else out there watch College Football?  I was pretty impressed with how close the games were, at least the ones I watched.  They all seemed to come down to the final seconds of the game…I love that!

While it’s practically a heat wave in the PNW…I didn’t even need a scarf or gloves today, I know some of you have really cold weather to deal with right now!  Stay warm, and stay safe!

What’s your favorite “warm yourself up” drink when it’s cold outside?
Hot Buttered Rum!