I love packet pick-up day.  Even though it’s no surprise what will be in the goody bag: bib, chip, flyers for upcoming races, maybe a few samples of gel/bars and glide etc.  It’s still exciting to go get the packet and start laying stuff out for race day!

It’s especially exciting when you get to make a “day” of it.  Since pick-up is in Gig Harbor, and my Mom is visiting, we are going to hang out in the harbor for a bit and take a peak around at some of the new shops, maybe get some coffee.

Speaking of being excited I finally got the cookbook I have been waiting weeks for! 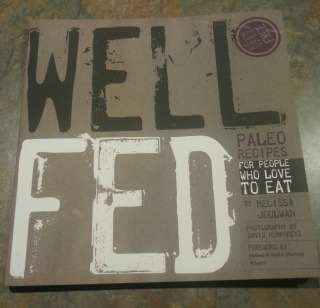 When we were in Santa Barbara Mark’s sister Kim made an amazing dinner for us from this book.  After spending some time looking through her copy I knew I had to have it! 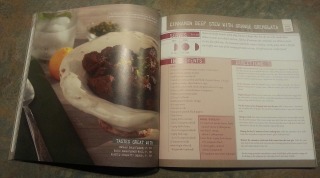 Cinnamon Beef Stew with Orange Gremolata, what we had at Kim’s.
﻿
Things I love about this book:
-The pictures are really pretty!
-Each recipe has suggestions for sides and what the dish pairs well with (all are other recipes from the book).
-Most recipes have a Notes section so you can make your notes as to changes/substitutions etc.
-It’s Paleo which means it’s gluten and dairy free = perfect for Mark!
-The Cinnamon Beef Stew will be just as yummy if we sub in Elk or Venison!  It’s hard to cook with wild game because the fat content is so low and I sometimes have a hard time finding recipes that work well, but there are several in this book that seem like they will work.
I’ll share the Beef Stew recipe once I make it myself with some Elk roast.
A note regarding Paleo, no we are not switching to a strictly Paleo diet.  It’s simply an avenue for me to find some new and different recipes that work for Mark’s food allergies.  It’s pretty easy for me to convert traditional recipes to gluten and dairy free, but dang it, sometimes I don’t want to have to think about it.  I just want to follow a recipe and not figure out what to replace certain ingredients with.  So, yes I’ll be delving into Paleo, but I’m not about to start eating cauliflower potatoes or spaghetti made from squash.  I have my limits!
Sky has her limits too, and I pushed them yesterday!  We ran errands and grocery shopped pretty much all day.  Not very fun for her, but she was a champ and only had one real melt-down around nap time…cue to go home and take a break from running around! 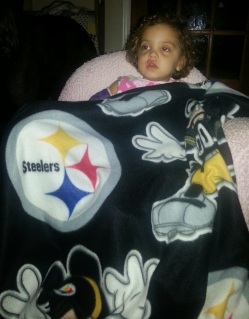 When she asked to watch Cars we were only too happy to let her…she earned it after hanging in all day with me!  I love that she is snuggled  up with one of her Steelers blankets!﻿

What is your favorite cookbook/recipe?