Sky and I had a good day today!

It started with a solo run for her and I.  There was a large group of stroller mommies who wanted to walk, but no runners.  So, Sky and I took the opportunity to scout a new route.  It ended up being 3.87, that’s .87 over the target distance for the stroller group, I got lost, and there were a couple of hills I was not expecting.

And, that is why I will not lead the group on a route I have not run myself first.  A few changes and not getting lost and it will be a good route.

I was loving the sun and apparently I was running at just the right speed to put Sky to sleep.  She was snoring like crazy by the time I got back to the store.

Then we came home and spent a lot of time playing on the new to us “big girl bed”.  It’s not a change I wanted to rush into, but it was given to us and we have limited storage space.  So, it’s in her room and when she is ready she will make the change.  Personally I like the containment of the crib, and she isn’t trying to climb out yet, so I’m happy to wait as long as possible.
In the meantime we will talk it up and get her excited about it and see what happens. 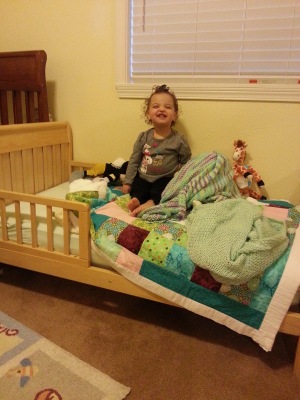 Since I didn’t end up going to Seattle as planned I was able to take the pants back that I was unsure of while Sky was at the parents this afternoon.  I ended up with this outfit instead. 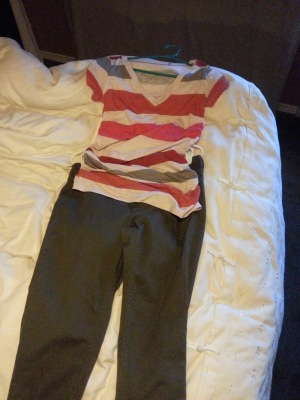 The outfit looks way better on!  The pants are THESE Wit & Wisdom pants in Olive.  The top is THIS Caslon shirred V-Neck.  Totally casual, yet able to dress up with heels and jewelry.  I am a happy girl.

Shout out to John in Point Of View at Nordstrom.  He was amazing!  I told him I was tired of the jeans and cute top look that I, and everyone else, fall back on for outings.  (While I technically ended up with jeans, they are olive colored and cropped, something totally different for me.  And, the shirt is striped, something else I never do, and multicolored so will go with other things.  I have several other tops that will work with the pants too!)  Anyway, John kept bringing in complete outfits with accessories and everything, telling me what to put with which pants and what combos to try until I found what was right.  He also told me which shoes to wear to dress it up or down.  There were so many cool tops he put me in, but I went for what would work with the most things I already own.  Making the most of my $$ that way.

Any time I have a little spending money and need some cloths I will be visiting John first from now on!  He added me to his book…makes me feel kind of special.  😉

I sort of wish he lived in my closet and could tell me what to put on every day!

I am way tired tonight from having such a good day though.  Not sure if it is getting back into the swing of running or what.  Or, could be I only had one cup of coffee this morning before starting my day.  Who knows.  Ready for bed and it’s not even 9:30 yet.

Good news is my foot doesn’t hurt any worse after running like normal this week.  It’s still a little sore, but it’s really hard to rest a foot injury.  Even if I don’t run I still have to walk around day to day.  Overall I’m happy with how I felt, and happy with the pace I was able to keep Tuesday night and today.  Time off usually kills my pace and endurance.

P.S. – I forgot to mention in the last post that I was able to add money to my Starbucks card with my birthday money.  I’m not a go get coffee every day person, but it’s nice to know I can go get it when I’m craving it, or walking with Jodi!  🙂