I enjoyed my time running with El and Lisa this morning and am thankful they can run hills and chit chat at the same time, because I can’t and I needed the distraction.  Unfortunately my tummy was not enjoying the run, and I ended up only making it through 4.3 miles.

The one and only drawback to running 5 mile drive is once your in the loop there are no bathrooms, so if you have issues, well you have really big issues!  That’s all I have to say about that.

On the up side of things I was test running a bunch of new stuff. 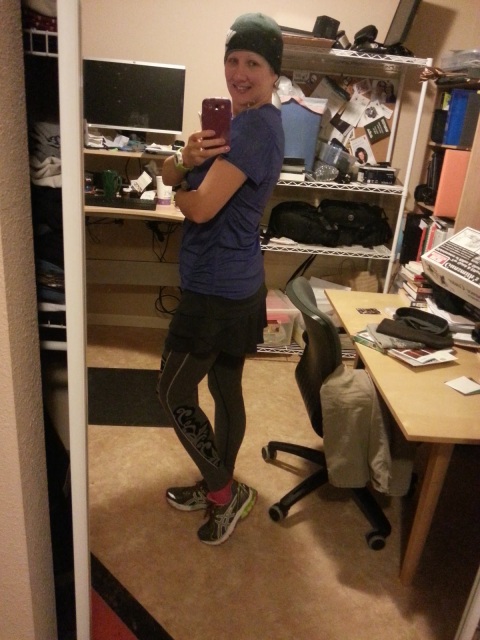 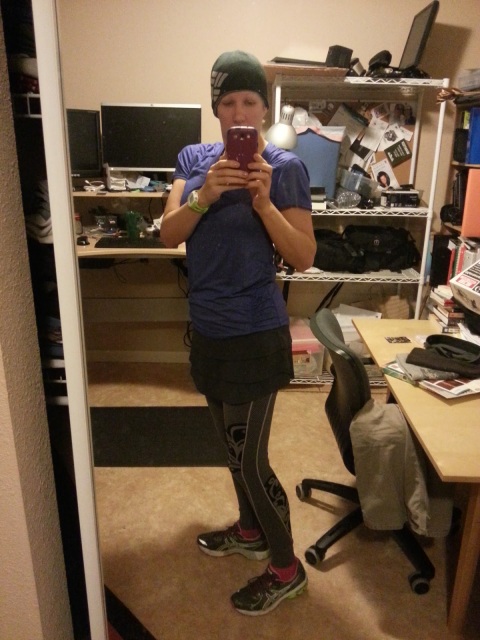 The shirt is from Costco and for $12.99 is a screaming steal of a deal!  It’s short sleeve and works perfect under my running jackets, it’s V-neck, tech material, hugs but isn’t clingy at all.  I have worn it on a previous run, but couldn’t remember if I posted it here or not, and am too lazy to check.  Thanks to some Christmas $$ I was able to go back to Costco and get the shirt in two more colors, so am set for summer running shirts!  It’s a long hem too, so covers everything you may want covered.  Go get one, or 10…totally worth it!
As a sizing note, I usually wear a M in all tops, but went for L in this material to accommodate the girls and not have it feel too tight in the warmer weather…hate my cloths sticking to me.  I love the fit, but can see that once the 1/2 training starts and the pounds start dropping (dropped 10 last time, and that was only running 1, this year I’m running 3) I may want M, so next time I’m at Costco will pick up a M or two to have on hand.
﻿

Again thanks to Christmas $$ (Thank you Dad!) I was able to order the running skirt in the picture.  It’s an Athleta skirt and has been on back order for close to a year.  They finally had my size, so I ordered it pronto!  It has cute ruffle tiers in the front, and two tiers in the back.  Love the mesh shorts underneath…will make summer running a little cooler!  It’s super duper cute, way more so than the pictures show!

Sizing note on the skirt, I got a M which is my usual size, and thank goodness there is a draw string, because it is a tad big.  The reviews on line said it ran big, but I have a feeling S would be too small with the hips I have to work with.

Dad got me the running tights, and I LOVE them!  They are not meant to be worn alone…they are a thick warm material for winter activity, but at the same time like nylons, so you need to have the assets covered or you will be flashing the world if you bend over/stretch in them!  Again they are Athelta, and are meant to be worn under skirts, so you can wear your running skirts (my fave thing to run in) year round!

Sorry for the blurry pic click here to go to the page and see what I ordered!  I like running with my cell phone for safety mostly, and for Runkeeper.  I like all my miles being tracked in one place, so even if I use the GPS watch, I enter everything into Runkeeper.  But, Mark and I got new cell phones and they are big old things, and my arm band was too small.  Plus the smallest armband in the brand I ordered was still too big for my puny little arms.  I have a belt that has water bottles, bib grommets for races, gel loops, zipper pocket, but the darn thing bounces around like crazy and I only use it if I have no other choice.

I have read a lot of reviews about SpiBelts and have been wanting one for a long, long time.  But, I was holding off because I already had a belt that worked even though I didn’t like it.  Until, the new phone came along, and I have not been running with the phone, unless I have the jogger and can stash it in there.  Since I still had some $$ to work with I went ahead and ordered the above Spibelt.  A little skeptical as to the zero bounce factor, but you know what…it really doesn’t budge!

I had my phone in there, and the mag flashlight I started this mornings run with because it was DARK!  And I never felt it, and it didn’t move at all…one run and I’m in love with it!  The nice thing is it fits passports and other stuff, so will come in handy when traveling!  I opted for the water resistant pocket since I run rain or shine and it’s my phone in there and it has 3 gel loops on each side of it, so that will be really nice come 1/2 marathon time!

Another blurry pic…click here to go to the page for a clear picture.  I have heard tons and tons of really great things about these Roga Shorts from Oiselle.  I have a few of their shirts and they feel amazing, so was really wondering about the shorts.  I have one pair of running shorts, but I don’t wear them often as they are pretty spandex’ish.  I found this summer that I had a really hard time keeping up with my running laundry, so since I had Christmas $$ to work with thought let’s give it a shot.  I tried them on when I got them, and love them.  Haven’t run in them yet because it’s too darn cold, but so looking forward to warmer weather so I can give them a go!

Next…running bra fitting and purchases to be made.  Have been doing all this running with only 1 good running bra!  It’s time to fix that!

I’m really grateful to have amazing support from Dad when it comes to running stuff!  I know that cute matching running stuff is not a need, but it is so nice to have it!  Everything I have functions at a high level and makes running feel easier.  There are enough “normal” running pains that having clothing that doesn’t add to it with chafing or whatever is really nice.

Plus there is something to be said for the mental aspect of feeling like you look good when running.  It helps, I don’t know why, but it does!  I may not be a costume while running kind of runner (nothing against those that do dress up in costumes…I think it’s fun and love seeing them run) but that is because I am fortunate enough to have good running gear and really cute running cloths, and I enjoy the heck out of my running stuff, so don’t feel the need to costume it up.

So looking forward to all my running adventures in 2013!