My heart was singing this morning while Sky and I were watching the ESPN pre-game show.  The announcers where on air talking about stuff and they cut to game film showcasing a players running ability.  Sky was sitting next to me playing with her little laptop (does not have internet…all she can really do is play with the calculator…sounds lame, but she loves it!) and as soon as the game footage started she started bouncing up a down with a huge grin on her face and threw her arms up in the air yelling football!

We are pretty excited around here because the Steelers game is actually on TV today…two weekends in a row!!!

It’s been a busy/crazy few days with plans being changed and/cancelled only to be replaced with new plans.  All too much to get into here.

Some pics from the week… 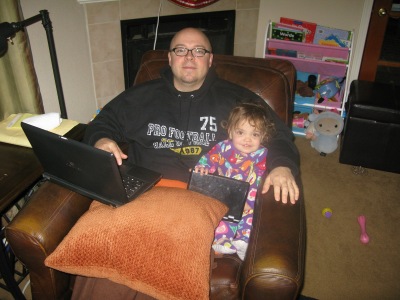 She loves sitting with Daddy and playing on her little laptop while he is using his.
We had a free pass to Fantasy Lights at Spanaway Park, and since our dinner with the Beckham’s was rescheduled due to sickness we all decided to drive through at the same time since germs don’t truck hop.  Sky was having fun waving at the other cars, but don’t think she was as impressed with the lights as we were.  She did get really excited about the snowman kicking a field goal though…my little football fan!  One of those rare times that she gets to sit in the front seat with us.  ﻿

Sky sitting with Daddy and helping him drive! 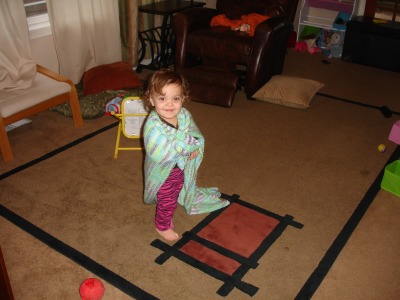 She has started using her fave blanket as a cape and running around the living room like super girl!