(Builder Bob sounds so much better than Builder Jen!)

It’s Christmas a bit early around here!  I received my first gift from Dad, Thank You!!!  I then spent the rest of the day gluing, hammering and screwing the thing together.  Did all of it by myself, until the very last piece.  It just doesn’t fit, so Mark is going to work his handy man magic to fit the top on and then we are good to go.

BTW – It is far enough off that Mark confirmed it’s not anything I did wrong that is making the last piece not fit.  But, it’s not so far off that Mark can’t fix it and it will be good to go.  I can’t tell you how excited I am to have this! 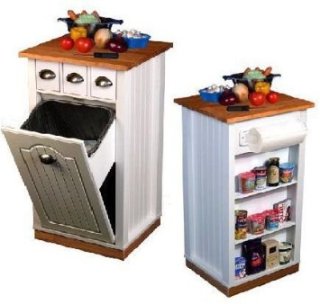 We will be able to hide the recycling in the tip-out bin, free up space in the pantry with the spice racks on the back side, get the paper towels off the counter, and have another counter top to work on!!!  Plus it’s on casters so if I need extra serving space at the table I can move it into the dinning room and use it in there.  Anything that gives us a little more space, but doesn’t take up the limited room we have in the kitchen is a great thing!  Thank you again Dad, I love it!

Oddly enough we also received Dad’s big gift yesterday, just after mine arrived.  But, I’m not posting a pic of that!  🙂