Welcome to day one of Amy’s interview!  I had too many questions to put it all in one post, so today is all about running the Chicago Marathon and what that experience was like.

(sorry for the funny formatting…I copy and pasted the interview so there is no risk of miss quoting her and it messed up the formatting.)

If you have any questions for me or Amy please let us know! 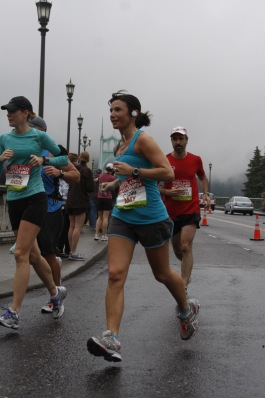 Not a Chicago pic.
First a little running history and how Amy started running:
-How many years have you been running?

Since I was in middle school I can remember going out on runs around the neighborhood.  My mom ran every morning with a neighbor, so early on I was introduced to running as a form of exercise.  In high school, I ran cross country.  I think I joined the team mostly because there weren’t any cuts and I wanted to be involved in another sport besides fast-pitch.   Often times I would cut out on long runs of 10 miles and didn’t really push myself during practice; I guess you could say it was a bit of a social event for me.

Throughout college, I ran some, but mostly did the elliptical in an air conditioned gym.  I considered myself a “fair weather runner” until 2008, up until that point I had done a handful of half-marathons, but never really trained for anything.

At the beginning of the year (2008) my brother-in-law and mom decided without me to run the Portland Marathon… I thought I would sign up also as it had always been my one and only life goal.  I trained with my mom and completed my first marathon in October of 2008.  After that, I did some running, but mainly worked out in a gym.  In the spring of 2010, I was introduced to who is now my running buddy (SuLee) – we run in the mornings together, through the winter, through the rain, wind, and snow. I now consider myself a runner or a “jogger with endurance”.

-How/Why did you start running?

I can’t remember a specific time when I started running, it was just something I saw my mom do every morning so it was normal to me. I  now run for exercise, but it also to keep me sane.  Nothing is as fulfilling as going out and running in the mornings before work while the streets are still dark and quiet.

Now…on to Chicago!
-I heard that the first mile was a rocky start with having to stop and put your shoe back on after someone stepped on it, and tripping and falling on a man hole cover.  What was going through your mind, and how did you get back on track for a PR finish?
The first mile of Chicago was horrible and I felt defeated by mile one.  As you can imagine, with 45,000 runners it is very crowded as we are all squished like sardines onto Michigan Ave.  Probably around the 1/2 mile mark, someone behind me accidentally stepped on the back of my right heal and my shoe fell off.  After taking a few steps, I went back to get it, tried to put it back on without untying it, but couldn’t.  I picked it up, ran over to the side of the road, threw off my gloves and untied my shoe, put my foot in and tied it again.  I remember thinking, “take your time now with the shoe so that you don’t have stop later to relace.”  The nicest spectator helped me and tried calming me down, I kept thanking him while fighting back tears… I totally thought, “there goes my BQ”, but I pressed on.  Not even a half mile later I totally wiped-out…. there were pads that covered grates on the bridges and I slipped and fell hard.  Luckily, I bounced right up, but again, I felt deflated and wanted to throw up my hands and say “Chicago… you win”.   I knew that I had lost a lot of time (a couple pointless minutes), and didn’t know  the pace groups that ran past me so I was totally discouraged.  Honestly, I never felt relaxed for the rest of the race.  With so many runners, I just couldn’t get in “the zone” and put my guard down.  I put my music on and just told myself to “let’s do it”.

-Was running a big race like Chicago what you expected?  What was the best part, the worst, and would you do it again?

Chicago was fabulous – I am still amazed by the organization of an event with 45,000 runners and 1.2 million spectators.  It was exactly what I expected in terms of the course, support and organization.  The pomp and circumstance was amazing – the whole city seemed excited.  The best part was going through the 29 neighborhoods; Chinatown was by far my favorite… it was just hilarious to see some of the locals out dancing and partying on the street, and it was around mile 21 where I finally got into my groove.  The worst was probably just how crowded it was; it was really hard to get into the “runners zone” because of constantly being worried about falling again. Also, I think it is hard in a way to PR when there are runners of that magnitude… I would totally do the race again if I happened to be in Chicago during that time or if a friend wanted to go with me.  I don’t know if I would go out to Chicago just for the race.

-Did you train different for Chicago than for other marathons?  If there were differences what worked and what didn’t?

I had a coach for Chicago who designed a schedule for me which was different than previous training plans I had followed (Hal Higdon).  The main differences were hill repeats and tempo runs on Tuesdays and Thursdays.  I ran six days a week with a scheduled day off on Sundays.  My husband and I had some big trips planned during peak marathon training so I did a lot of long runs on vacation in New York and Ireland.  It was great to run in a different environment and outside of my comfort zone.  Honestly, I felt so relaxed leading up to the marathon that I was a little worried that I could have done more training… but, I accomplished my goal!

-Any tips on how to travel/change times zones for a race?
This was the first time I ever changed time zones for a race.  Like I said earlier, I think it helped that I ran a lot in New York at the end of July and I did an 18 miler my first full day in Ireland, followed by a 16 miler a week later.  I believe that trained my body to get used to running while not rested 100% and in a different environment.
-What was going through your mind when you crossed the finish line in Chicago?
I DID IT! At about mile 24 I saw my husband and I wanted to yell to him, “we’re going to Boston”, but I didn’t want to put the cart in front of the horse.  The last few miles I was thinking of all the sacrifices I’ve made to make running and training a priority and they paid off. It was the second best day of my life (the first was when my niece, Reagan, was born)…. many people might think, “what about your wedding day?”, but I knew I was going to marry BJ and it wasn’t something that I had to work for every single day like training and running a race.

Check back tomorrow for some general running questions and answers/advice from Amy!