We had a great time in Whistler!  The weather was amazing, mid 80’s to low 90’s the entire time.  That is pretty much unheard of up there this time of year.  We made the most of it and were outside in the sun every day!

I managed to get two runs in.  It’s funny because I enjoyed them, had fun running while I was there, but both times was having GI issues to the point I was on the verge of crying.  I even managed to get lost trying to get back to the condo, which only added to the distress.  I know it’s due to eating different and not keeping up the same pre-run ritual I have no matter how long or short the run is going to be.

The upside is Whistler is full of fit people that are pretty, so the eye candy was nice, and no bear on the golf course this time.

(not Whistler related but Mark and Sky biked while I tried to pace them during an afternoon run today.  Chasing my babe and my baby are a great way to speed up!  First mile was blazing, but I can’t maintain that pace for too many miles.)

Thankfully we have a lot in common with my aunt and uncle when it comes to sports, food, and drinking.  Basically all of it’s good and needed in large quantities.  😉

It as a great week of fun, trying new places to eat and new foods and cooking some great, great food at the condo for dinner!

Here are some of the pics…check out this link for more: Whistler Pics 2012

All of us: Sky, me, Mark, Uncle Paul, Aunt Candy.  This was our first lunch on the first day.

Turns out a bidet is the perfect size for a 15 month old bathtub.
Love the Bucky Beaver face.

I figured once she was in it we should get a few cute pics.  The germs/nasty factor already happened so why rush to get her out?  I don’t think the thing gets used often it was, and has always been, spotless. 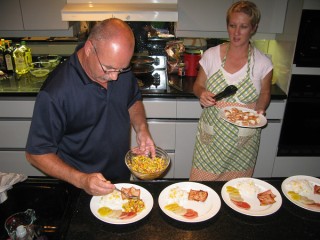 So this was a lot of fun.  Candy and Mark did a chopped basket for Paul and I since the two of us love to cook.  They picked out Tiger Prawns, Canadian Bacon coated in Corn Meal, Ginger Beer, and Mango.  After reviewing the ingredients we were allowed to pantry shop for what we thought we may need.  The pantry was the local farmers market where we got 3 different varieties of beets, and corn on the cob and at the local Market Store we got rice.
We had everything else we used in the condo already.  We came up with a Mango Salsa topped with tiger prawns marinated in ginger beer and garlic and cooked in the Canadian bacon drippings.  Canadian bacon browned and then glazed with maple syrup caramelized in the pan, Rice cooked with the ginger beer and mango added at the end, and beets boiled.
The beets were pretty amazing as all three were a sweet type of beet and tasted amazing!
Oddly enough we were stumped by the Canadian Bacon.  It was the hardest thing to work in, but it all ended up tasting amazing even if it didn’t all totally belong on the same plate together.
It is really hard for me to cook without a recipe to follow, so this was completely uncomfortable for me, but so much fun!

First day in the village we hit the liqueur store and stocked up for the week.  Yep, we got so much that we had to vacate Sky and fill the stroller, even the underneath basket was overfilled.  It ended up being mostly wine which made me feel a little less white trash.

Sky enjoying the view of the golf course and the village from the floor to ceiling window in the living room of the condo.

So this was a theme for her…standing on grates, jumping on them, yelling at them, stomping her foot on them.  This was hard for me because I have a completely irrational fear that if I step on a grate I will fall in.  But I’m sucked it up and let her have her fun. 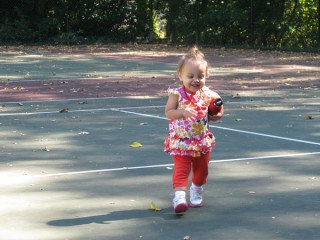 This was on the drive up to Whistler.  Sky was hungry and ready to get out of the truck.  We picked up stuff for lunch and found a fully fenced tennis court in the middle of a nice area.  So we went in, shut the gate and let her run in out for a good hour.   She loves just running around. 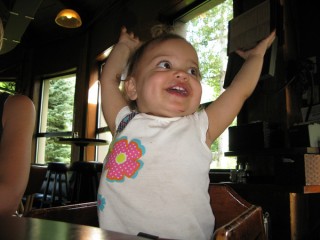 Wednesday night we went to the local brewery for the NFL opener.  We were literally the only people in the place and had to request that the game be turned on.  The staff was amazing though.  As soon as they knew what we needed they hooked us up with a great table surrounded by TV’s, and the service and food were great!  We left during the 3rd quarter to get Sky back to the Condo for bed and leave before the under 19’ers get kicked out. 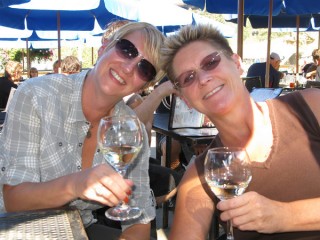 Just a couple of cute winos.
Sky was a champ the entire week.  She spent way more time in her car seat than is her preference, missed naps most days, or took very short ones, and our eating schedule was all over the place.  She even suffered through a nice, I mean REALLY NICE fancy dinning experience on our one big night out.  She was charming and amazing the entire time.  Not to say she didn’t have her moments, but they were just little reminders to find her a place to run around and have some fun and or find her some food.
It was hard to come home because we had such a nice time, but now that I’m home It’s nice to be in my own space enjoying the memories and pics.