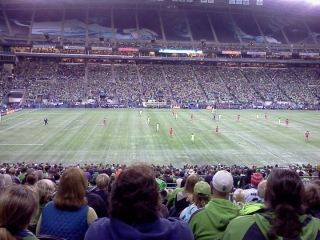 These are out of order.  Top picture is the beginning of the game and the bottom picture is warm up prior to game time.  We had nice seats! 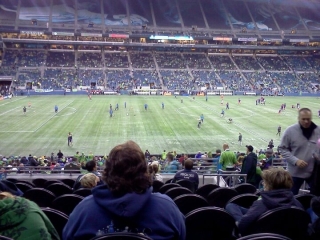 I am lucky enough to be friends with Sandi Holdner, who just so happens to be a season ticket holder to the Seattle Sounders.  She was kind enough to get extra tickets when the US Open Cup final’s tickets went on sale.  Which means I got to not only go to a play off game several weeks ago, but I also got to go to the final game last night.

And, for the third year in a row the Sounders have won the US Open Cup!!!  What an experience seeing them play at Century Link field with over 36,000 fans!  Once again Sounders fans are unlike any sports fans I have ever seen!  Cheering, clapping, singing, booing, jumping up and down the entire time.

Final score was 2-0, both goals being scored at the end of the match.  I have said it before and I say it again…soccer players may be the most athletic athletes out there.  They cover a ton of ground very quickly and it’s pretty much non-stop running for 90 plus minutes.

Great team, perfect weather, better friends, and a win!  Was a great evening!

Follow todaysadventureis on WordPress.com
When your HS Librarian is still impacting your life through books. Sky was so excited about her new books she read all evening! #livingtheskylife #bookworm