We decided to hit the beach and visit Westport with our good friends the Beckham’s, Josh and Dev, and some HS friends of Bob and Josh’s for the long weekend. Even though we got rained on most of the weekend we still had a great time! We even had one whole day of sun that was spent playing ultimate frisbee, beach football, and ended with a big bonfire on the beach with smores and word games around the fire. Good times were had by all!

Not sure why this photo is so small! We spent Friday driving around (in the rain) seeing the sights. We had no idea there were thousands of acres of cranberry bogs in Westport. Most of them are farmers that grow for Ocean Spray. Interesting fact, Ocean Spray is actually a co-op that is owned by the farmers that grow the product. I would love to see the bogs when they are ready to harvest…I bet the color is amazing! (Another interesting fact…they no longer flood the bogs to harvest. Apparently that is old school these days.)

We say a lot of wildlife including this bald eagle, we were really that close to him when he decided to take flight.

Bishop and I chillin, or as Mark says it looks like I’m strangling him.

Don’t ask me why we decided to find the highest point we could in the middle of wind and rain, but we climbed to the top of this observation tower and were literally getting blown around and drenched. Bob was back at the truck because Kiera was asleep and decided to moon us. Didn’t get a photo of that. I was cracking up at Grace because she held my hand on the way down, and with every step she was saying “holy crap”. It was a little scary as the wind was really strong and the stairs were wet. 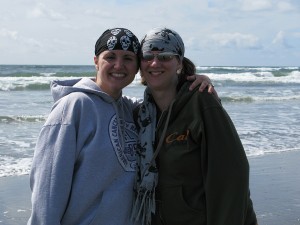 Michelle and I showing off our pirate wear.

Again, not sure why this is so small. We saw these baby seals during one of our walks. We were able to get up really close, but were careful no to touch them. These were new, as one still had the umbilical cord attached.

Mark and I on the beach with Bishop. We were able to let him off leash a few times as the weather was so bad there were very few people around. Him and Lucy (Bob and Michelle’s dog) ran around and chased balls together, and he didn’t run off!
There are a lot more photos here: http://markyeatman.smugmug.com/ click on the Memorial Day Camping 2010 link and you can see the rest and a few videos as well.
Can’t wait for the next camping trip!