Skip to content
Mark and I just got back from a week in Whistler and boy did we have a great time. We started out mountain biking, then moved on to bungee jumping, hiking, and exploring some off-road trails.
Day 1
No photos of biking…did not want photos of my injury. After that we Bungee Jumped 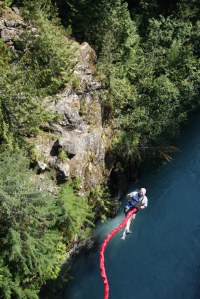 …then me. It was the scariest yet most exciting thing I have ever done!

Day 2
We spent day two exploring some of the logging roads and off-road trails.

We came across this honor system produce stand run by three kids. There was a welcome message from them, a radio playing and plenty of produce, pop, and a few snacks to choose from. They had a lock box for us to put money in. 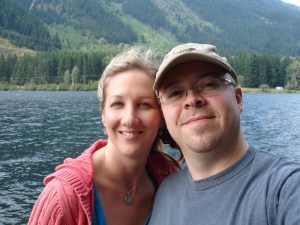 This was a windy lake we found.

This was on the edge of a look-out on one of the logging roads. Someone had built a little rock statue similar to the Olympic statue on the Whistler Summit.

I think this was actually day 3 or 4, but was a cool wooden bridge over the river that we found.

This was a great playground we found on the shore of a lake in one of the many really nice parks Whistler has to offer. Can’t wait until we go back next year with friends and their kids! The kids will love it!
Day 3
We spent day 3 on the peak hiking as much as we could given my bum leg from biking.

I can’t figure out how to get this right side up, so just tilt your head! This is the new Peak 2 Peak gondola that goes from Whistler to Blackcomb. It is a huge gondola that you can walk around in and is a 11 minute ride with great views! 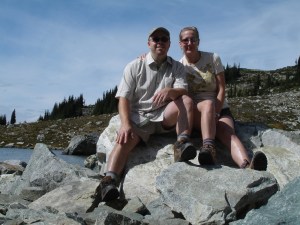 We hiked from the Peak to this alpine lake. Mark jumped in and based on how cold he said it was and the fact that he could hardly even breath in the water I decided to stay nice and dry on land.
Day 4 was spent driving around and exploring more.
Day 5
We had no idea there was a Down Hill race time trial taking place, so Mark spent a lot of time taking photos while I shopped a bit. Then I came back to watch some of the time trials and we both finished up the day with last minute shopping.

Red Bull Exodus is the first mass start down hill race that has ever been done at Whistler and from what they said that has ever been done with world class riders period. There were riders from all over the world trying to qualify for the race and out of 400 riders only 150 would make it to the actual race the next day. During the race they would start at the Peak, take around 30 minutes to get down the mountain and hit speeds over 50 miles per hour. They were hitting that same speed in the time trials and had some pretty good jumps at the bottom of the course.
Day 6
We decided to come home a day early so we could avoid traffic at the boarder and have time to relax before joining friends for a B-Day party the next day.
There are more photos and Mark has a video of his bungee jump on our photos site: http://markyeatman.smugmug.com/