I was lucky enough to attend the 2008 Great West Division Relay For Life Leadership Summit in Reno this year. Out of 12 states and 5o0 Relays Tacoma walked away with awards for Top Fundraising event (back on top where we belong!!!), Top Online Fundraising event for a community event (UW won the top online college event!), Second place for most growth in fundraising dollars from the previous year, and Pierce County was the Top Per Capita Fundraising county.

Despite the busy schedule of general sessions and breakout training sessions we managed to find time to go out and have a little fun. Thursday night we took a taxi into town and hit Shooters and then moved onto a casino (can’t remember the name) for some Karaoke. 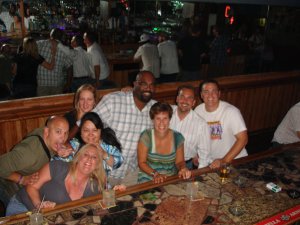 Yes I know the photo is a little blurry, but it is the only one I have of all of us at Shooters. 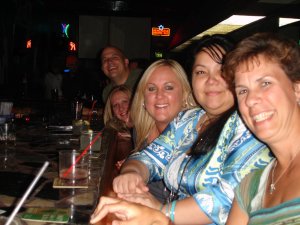 Bob and the ladies. 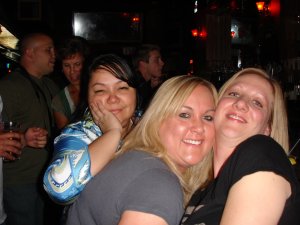 Michelle (looks like she is falling asleep), Cara and me.

Bob trying to lick Ted…not sure what that was about.

Moinca, Bob, Sandi, and I at the Pacesetter Awards Ball! Tacoma hit several benchmarks during the year to qualify as a Pacesetter event which earned us an invitation to a special reception for Pacesetter events only.

Bob’s attempt at hair…it worked though. Looks like Matt liked it!
There are more photos than this, but some of them are probably best left off the Internet. If anyone wants a disk of the photos let me know and I will get one to you. Everyone but Matt that is. No slide shows of Reno will be airing at Relay!